Shared Messages from the Universe

Yesterday, I had a mass transit adventure traveling to Brooklyn via the subway. Happily on my return trip I chose to take the East River Ferry.

There was a sky writer creating a message and had been underground I never would have seen the message from the universe.  Last Chance was seen before I docked. Now was noticed as I was standing on the street waiting for a bus.

Has the universe been sending you messages?  Have you noticed them?

Upload your shared messages from the universe to flickr and then join my group by the same name so you too can share your universe messages.
Posted by Lori at 7:52 AM 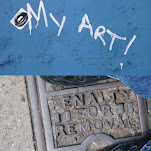